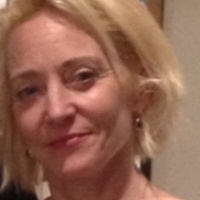 Goodeve was born in Middlebury, Connecticut, where she lived until her family moved to Windham, Vermont. Her brother is actor Grant Goodeve, and she is a great-great-granddaughter of the Vermont politician and Union Army Colonel William T. Nichols. She attended the Westover School in Middlebury, Connecticut and Northfield Mount Hermon School (NMH) in Massachusetts. In 1975, through NMH, she attended the American School of Tangier where she met Paul Bowles and Mohammed Mrabet, key influences on her career as a writer.[1] She received a B.A. from Sarah Lawrence College (creative writing, film, philosophy), an M.A. from New York University (cinema studies), and a Ph.D. from the University of California, Santa Cruz under Donna Haraway and James Clifford.[1] She lives in Brooklyn Heights, New York.