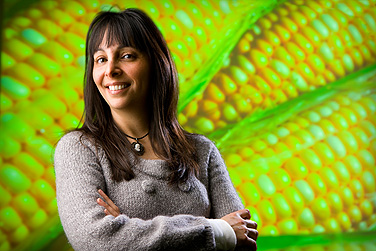 Stefani Bardin explores the influences of corporate culture and industrial food production on our food system and the environment. She works with neuroscientists, biologists and gastroenterologists to ground her research in the scientific world. These investigations take the form of single and multi-channel videos, immersive and interactive installations as well as tools for measuring and/or mediating these influences.

Several of her current projects include M2A: The Fantastic Voyage, an ongoing collaboration with a Gastroenterologist at Harvard University using wireless gastroenterology devices to look at the impact of processed foods versus whole and less processed foods on the body; M(y)crobes – a project with a neuroscientist and digital artist that explores human cohabitation with the microbes that live within, on and around us using wearable biosensors to measure the effects of one’s own biotic micro-ecosystem in concert with the macro-ecosystem of the environment; and La Casita Verde, a 2000 square foot lot empty lot in South Williamsburg awarded to her and her collaborator Brooke Singer by the NYC Parks Department to develop an R + D lab for art, science and technology projects that address issues within the Food Soil Web. They are partnered with members of the community to also address issues of urban design, urban agriculture and urban intervention and just received a $25,000 grant from the Greenpoint Community Environmental Fund to develop curriculum in the space.

Her work has been written about in Wired Magazine, Scientific American, Art21, Forbes, New York Magazine, The Huffington Post and The Village Voice. She is currently working on an article about the role of science in her work for The Arts, Science and Technology journal Leonardo.