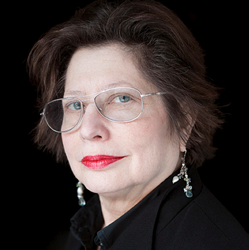 Suzanne Anker is a visual artist and theorist working at the intersection of art and the biological sciences. She works in a variety of mediums ranging from digital sculpture and installation to large-scale photography to plants grown by LED lights.

Her work has been shown both nationally and internationally in museums and galleries including the Walker Art Center, the Smithsonian Institute, the Phillips Collection, P.S.1 Museum, the JP Getty Museum, the Medizinhistorisches Museum der Charite in Berlin, the Center for Cultural Inquiry in Berlin, the Pera Museum in Istanbul and the Museum of Modern Art in Japan.

Her books include The Molecular Gaze: Art in the Genetic Age, co-authored with the late sociologist Dorothy Nelkin, published in 2004 by Cold Spring Harbor Laboratory Press, Visual Culture and Bioscience, co-published by University of Maryland and the National Academy of Sciences in Washington, D.C. Her writings have appeared in Art and America, Seed Magazine, Nature Reviews Genetics, Art Journal, Tema Celeste and M/E/A/N/I/N/G. Her work has been the subject of reviews and articles in the New York Times, Artforum, Art in America, Flash Art, Nature and has been cited by Barbara Maria Stafford, Donna Haraway and Martin Kemp in their texts. Most recently she has collaborated with anthropologist Sarah Franklin, on an article and interview for Social Text journal.

She has hosted twenty episodes of the Bio Blurb show, an Internet radio program originally on WPS1 Art Radio, in collaboration with MoMA in NYC, now archived on Alana Heiss’ Art On Air. She has been a speaker at Harvard University, the Royal Society in London, Cambridge University, Yale University, the London School of Economics, the Max-Planck Institute, Universitiy of Leiden, the Hamburger Bahnhof Museum in Berlin, the Courtauld Institute of Art in London, Banff Art Center any many others.

Chairing SVA’s Fine Arts Department in NYC since 2005, Ms. Anker continues to interweave traditional and experimental media in her department’s new digital initiative and the Nature and Technology BioArt Lab.